When nothing in life seems to be falling in place, when you are tired of your cumbersome life, tired of the routine life, pack your bags and move to the mountains where you will get to meet your own soul and find time to spend it with yourself to introspect, to retrospect and find the solution to all your problems. Mountains have fascinated me since my childhood, for me going to the mountains is going home. The wilderness reminds me of what it’s like to feel alive. The sight of those lofty mountain peaks would feed your soul to the eternity. In this article, I’ll list out the top 10 must see mountain peaks in India, in descending order starting with the highest accessible peak in India.

Earlier it was believed to be the highest peak in the world but in the year 1852 Great Trigonometrical Survey of India conducted calculations based on various measurements it was concluded that Mount Everest is the Highest mountain in the world, Kanchenjunga being the third highest.

The climatic conditions of the mountain region makes it a perfect home to diverse flora like coniferous forests, the eastern Himalayan alpine shrub, meadows, savanna, and grasslands making the landscape irresistible to visit. As there is abundance of forests, this led to the sprawling of wildlife in the region providing quintessential habitat for their survival. Thus, Jore Pokhri Wildlife Sanctuary, Singalila National Park, Senchal Wildlife Sanctuary, Mahananda Wildlife Sanctuary and Neora Valley National Park are located in this region.

There are four climbing routes to reach the summit of Kanchenjunga, three of which are in Nepal and one from Sikkim in India. However, the Indian government has banned treks to Kanchenjunga and therefore, this route is closed since 2000. Irrespective of this Kanchenjunga can be viewed from various other spots like some hill stations of Darjeeling, most famous being the Darjeeling War Memorial. It is a revered mountain for the people of Sikkim. Indian government seldom gives permission to climb the mountain, therefore, its magnificence is still preserved unblemished. In Sikkim too, trekking into the Kanchenjunga region has just recently been permitted. The Goecha La trek is gaining popularity among tourists. Another trek to Green Lake Basin has recently been opened for trekking. This trek goes to the Northeast side of Kanchenjunga along the famous Zemu Glacier.

The mountain is quite popular for its rich flora and fauna, thus the region has religious as well as ecological significance. To conserve the natural resources of the region and to protect the ecosystem, the government has set up Nanda Devi sanctuary covering the whole mountain system including the Nanda Devi peak as well as the other mountains surrounding the peak. Earlier the sanctuary was kept close with a view to protect the ecosystem of the area. Then it was reopened in the year 1974, soon afterwards the sanctuary witnessed rampant cutting of trees, accumulation of garbage and grazing. Thus it was again closed to both locals and climbers in 1983. Nanda Devi National Park was declared a UNESCO World Heritage Site in 1988. Thus whole sanctuary and the main peak are beyond the accessibility of locals and for climbing expeditions. However, Sunanda Devi is still kept open.

Located in the Garhwal region of Uttarakhand, Kamet is the second highest peak in this region after Nanda Devi. It rises to the height of 7,756 m or 25,446 ft. It is in the shape of a huge pyramid with a flat summit.

Being in the close proximity with the Tibetan Plateau, it experiences a good amount of wind coming from the direction of the plateau. This peak is quite a spectacular sight during sunrise and sunset, as its rock is copper colored, when sunlight falls on the surface of the rock it gets reflected through the hanging glaciers giving the mountain a magnificent red burning glow, due to this phenomenon it is also famously named “glacier fire”. Mount Kamet have two glaciers one on its west and the other on its right. The West Glacier falls into the Saraswati River while the East Glacier falls into Ghauliganga River which are tributaries of the Alaknanda River.

Located in the Garhwal Himalayas, in the state of Uttarakhand, with an elevation of 6,904 m, Thalay Sagar is one of the most beautiful snow clad mountains in the Gangotri Group of mountains. It is situated on the south of Gangotri Glacier at the distance of only 10 kilometers southwest of the sacred Gaumukh from where the Bhagirathi River originates, which is one of the tributaries of River Ganges. It is spectacular for many reasons like it’s steep on all sides and a famed prize for mountaineers. At the base of this peak lies a beautiful lake is known as Kedartal, making the landscape irresistible. 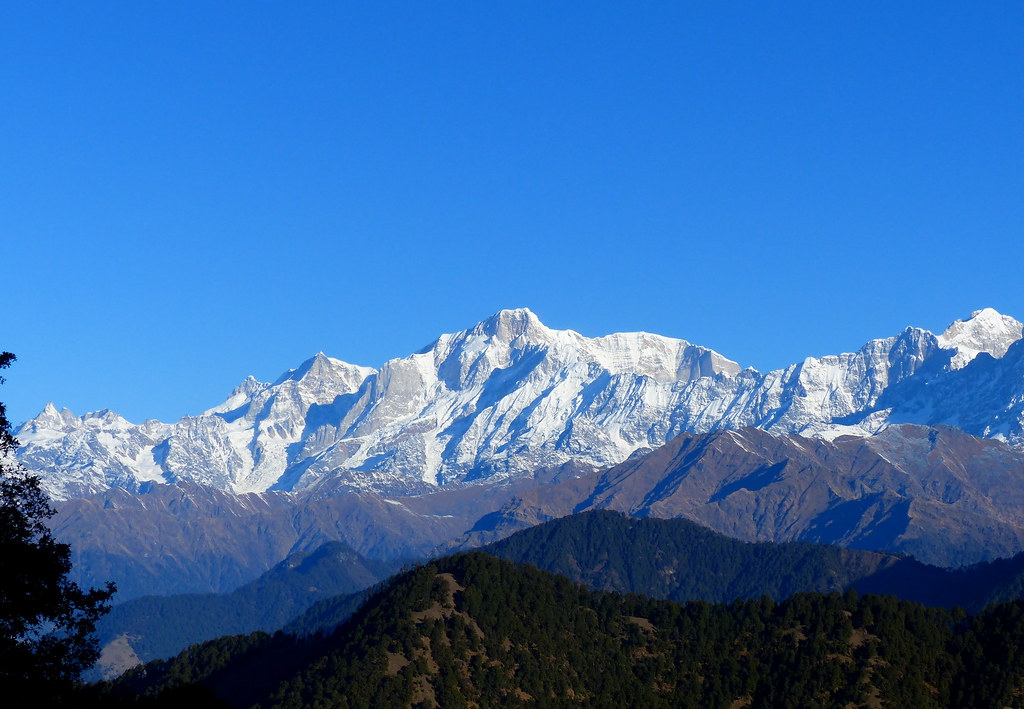 This mountain consists of two peaks namely Kedarnath Main and Kedarnath Dome. Just like Thalay Sagar, Kedarnath is also located in the Garhwal Himalayas, in the state of Uttarakhand with an elevation of 6,940 m and is also one of the magnificent mountains in the Gangotri Group of mountains. It is also situated on the south of Gangotri Glacier at the distance of only 10 kilometers South of the sacred Gaumukh from where the Bhagirathi River originates, which is one of the tributaries of River Ganges.

Located in the Western Ghats, Anamudi lies in the Indian state of Kerala. It is the highest mountain peak of South India as well as of Western Ghats. With an elevation of 2,695 meters or 8,842 ft. The mountain has derived its name from the Malayali word that means “elephant’s forehead”.

This peak lies in the Periyar River basin. Like all the other mountains of peninsular India, the Anamudi is a Fault-block mountain, unlike Himalayan mountains which are Fold mountains. It is situated at the intersection of the Cardamom Hills, the Anaimalai Hills and the Palani Hills in the southern region of Eravikulam National Park. The route to the summit of Anamudi is very uncomplicated starting with grass slopes, there comes a rolling high plateau with an elevation of about 2,000 meters or 6,600 ft.

Being rich in the variety of flora and fauna, Anamudi and the Eravikulam National Park surrounding it is an abode to the largest population of the Nilgiri tahr, Asian elephants, Gaur, Bengal tigers, and the Nilgiri marten.

The mountain receives ample rainfall throughout the year thus the region is rich in flora and fauna which led to the formation of a reserved forest around the peak. It is only 9 km away from Ooty. The mountain is quite accessible with the road to its summit and thus it is one of the most visited tourist spots in India. It’s slopes and surrounding forests are covered by Sholas, Rhododendron trees, flowering sub-alpine shrubs, and herbs.

As it is a popular tourist site special arrangements have been made to make the place worth visiting, for example, an observatory has been set up at the top of Doddabetta in 1983 with two telescopes available for the public and is under the control of Tamil Nadu Tourism Development Corporation (TTDC). The other must visit spots in the area are Botanical Gardens, Nilgiri Mountain Railway, Rose Garden, Ketti Valley View, Ooty Lake, Heritage Train, Murugan Temple, Avalanche Lake and Emerald Lake.

Located in the Indian state of Rajasthan near the Gujarat border, Guru Shikhar is a peak in the popular tourist spot of Mount Abu in Aravalli Mountain Range. It is the highest peak of Aravalli Mountains reaching the height of 1,722 meters or 5,650 ft. Mount Abu is in the shape of 22 Km long rocky plateau.

The peak has pretty good accessibility as a road from Mount Abu leads to the summit of Guru Shikhar. The peak is named after Dattatreya, an incarnation of Lord Vishnu. At the summit of the mountain, a cave is there which contains a temple dedicated to Dattatreya. In the vicinity of the Temple lies Mt Abu Observatory, which is operated by the Physical Research Laboratory to undertake Astronomical experiments. Owing to its high altitude of Mount Abu region it is like ‘an oasis in the desert’. Its heights are an abode to rivers, lakes, waterfalls and evergreen forests. Being the only hill station in Rajasthan it has been a popular place of escape to the scorching heat of summer for the people of Rajasthan and neighboring Gujarat. As the region has rich flora and fauna, the Mount Abu Wildlife Sanctuary was established in 1960. Other places to visit in the region are the Achalgarh Fort, built in the 14th century by Rana Kumbha of Mewar and Nakki Lake.

Kalsubai is the mountain peak located in the state of Maharashtra, in Western Ghats range. It is the highest peak of Maharashtra reaching the height of 1646 meters or 5400 ft, which is why it is popularly known by the title of “Everest of Maharashtra”. The mountain is surrounded by a rich variety of flora and fauna leading to the establishment of the Kalsubai Harishchandragad Wildlife Sanctuary. From the summit of the mountain, Arthur Lake can be spotted, which is a quiet and calm lake surrounded by dense forests, giving it a spectacular view from the top. From the eastern slope of the mountain Waki River originates, which is a tributary of Pravara River.

This mountain is one of the most preferred mountains for the trekkers, devotees and wildlife enthusiasts. Thus, trekking routes have been designed and developed to reach the summit and an iron ladder is also constructed along the vertical hill slopes for easy access for the trekkers and devotees. While trekking along these routes a trekker may counter dicey slopes, treacherous rocks or sometimes even easy to climb slopes.

At the top of the mountain, the summit of which is flat provides space for a famous temple of a local deity, Kalsubai. As the temple is present at the mildest of the rain forests, so on the outburst of monsoon the flowers of various colors clad the landscape giving it a spectacular view.

A number of forts have been built around the mountain by various rulers. It was on this summit on which 69th Independence Day was celebrated in 2016 by the Indian Navy when the largest flag of India measuring 60 feet was unfurled. 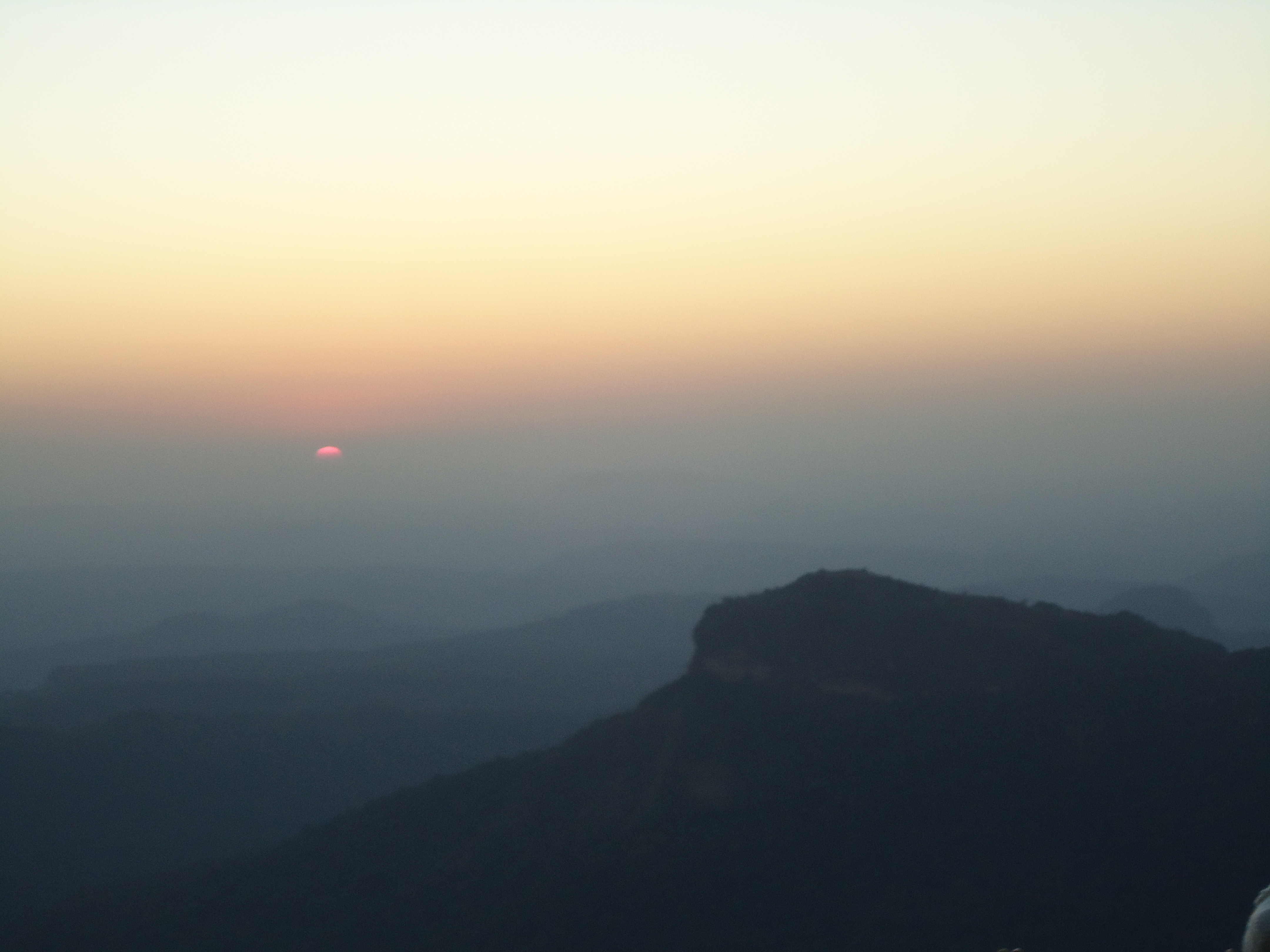 Located in the hill station of Panchmarhi, in the state of Madhya Pradesh, Mount Dhupgarh is in the Satpura Mountain Range. It is the highest peak of Madhya Pradesh as well as of Satpura Range with an altitude of 1,350 metres or 4,429 feet.

Panchmarhi is popularly known as “Satpura ki Rani”. The place is also famous for its timber which includes teak, but with the view to conserve the forests cutting of trees is banned in the area.

This region has diverse species of flora with lush green forests and diverse species of fauna. This lead to the presence of numerous spots of tourist attraction like the popular sunset point at the top of Dhupgarh mountain, Rajat Waterfall, Draupadi Kund, Mid Point of India among others.

If between mountains and beaches you would choose mountains then what are you even waiting for? Leave for any of the above as soon as possible and enjoy the freshness in the mountains, different kind of fauna, meet all kind of people and spread the happiness once back downhill.